Old Froglegs, or: How I learned to stop worrying and love brewing barleywine

Big beers seem to be the norm for some homebrewers. The word “imperial” is thrown around at homebrew club meetings more than at Star Wars conventions, and barleywines seem far more prevalent at the homebrew level than commercially. I suspect many people become homebrewers just to hoard gallons of nose-hair singeing strong ales for a fraction of the cost of buying it commercially. Not me. I mostly drink beers around 8% ABV or lower, and my brewing habits reflect that.

Like many homebrewers, my mash efficiency suffers with bigger grain bills. I get great efficiency with beers around the 1.050 mark, but with beers around 1.070 it’s decent (not astounding). Satisfied with brewing beers mostly in the 1.050-1.080 range, I’ve haven’t bothered to rock the boat by trying a bigger brew. Over time, the idea of brewing a really big beer like an American barleywine became a little intimidating. Imagine a whole category of the BJCP Style Guidelines staring back at you when you close your eyes, whispering, “You’re not man enough to brew me, and you know it.”

Oh, but there’s nothing like having a baby to change your perspective. Faced with responsibility for an adorable but needy new organism while surviving on Clif bars and fifteen hours of sleep a week, the most intimidating non-baby-related activity in the world sounds like a vacation. That first month, I probably could’ve been talked into skydiving. So when someone suggested I brew a barleywine to commemorate Lucian’s birth, my enthusiastic response of “WHY THE HELL NOT!?” was, I’m sure, loud enough to be heard across the Texas Hill Country. I decided to make it the first beer I brewed after he was born.

I started with a name: Old Froglegs American Barleywine, after a nickname we gave Lucian within hours of being born (his legs were constantly crossed as a newborn). The recipe was big but simple, in keeping with my recent emphasis on fewer carefully chosen ingredients. 19 pounds of Maris Otter formed the base: a premium malt more expensive than plain American 2-row, and on a grain bill this big cost adds up. But Maris Otter has great flavor, and besides, how many “first beer after my baby was born”s do you get? I added 3 pounds of light Munich for melanoidins and a half-pound each of Crystal 60 and Crystal 150 for caramel and dark fruit notes. If you’re counting, that’s 23 pounds of grain (plus rice hulls) that would go into my 10-gallon cooler mash tun.

Expecting that high a ratio of grain weight to mash tun volume to seriously impact my efficiency, I took a few measures to compensate:

By milling my own grain I hoped to achieve a finer crush than what I’d get at the homebrew store – admittedly a crap shoot, not knowing how their mills are set. I didn’t actually buy my new Barley Crusher MaltMill for this brew, but it happened to be its maiden voyage. Earlier this year I realized that brewing with a newborn around would require flexibility, since daddy tasks might pop up unexpectedly on the weekend (I was right). With a malt mill in my arsenal, I can buy unmilled grain and crush it on brew day, ensuring fresh malt even if brew day is postponed by a week or more. 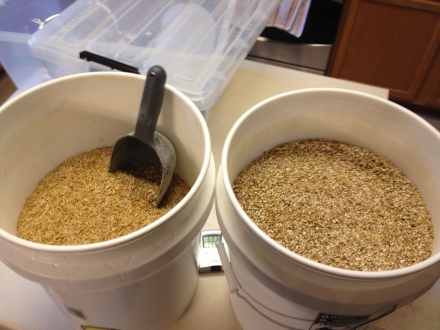 Pictured above: the quantity of grain known to maltsters as a metric assload.

I doughed in at a stiff 1 qt/lb and added the rest of the liquor (to 1.25 qt/lb) only after I was sure that my mash tun would fit it all. It did, barely. I sparged to collect just shy of ten gallons of wort, which didn’t fit in the brew kettle, so I saved the extra in a pitcher and added it to the kettle as it boiled down. I didn’t actually start the boil timer until all the wort had been added and boiled down to my usual starting volume. All in all, the boil lasted about 150 minutes. 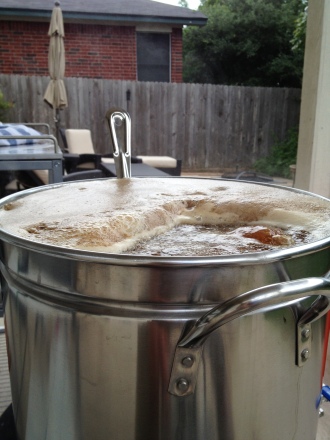 On the edge of boiling over. He’s a madman! A maaadmaaan!

Once boiling was underway I added a pound – 2 pressed cones – of piloncillo (a.k.a. panela), an unrefined cane sugar particular to Latin American cuisine. I’d had it in the pantry for some time and it seemed a great addition to a barleywine, with its rich molasses flavor and high fermentability leaving the beer high in alcohol and low on cloying sweetness. Protip: smashing the cones with a meat tenderizer before adding them is great stress relief.

I added only 60-minute hop additions to the boil for bitterness. I had 1.75 ounces of Warrior and 1 ounce of Galena in the freezer, so I used them. I also added yeast nutrient to the boil because of the high gravity and 4% adjunct sugars.

I met my gravity target and then some, achieving an OG of 1.114. I pitched 2.5 packets of Safale US-05 dry (I ran out of time to rehydrate) and it took off like a rocket, with bubbles coming through the airlock less than 16 hours later. Two weeks later, the beer was at 1.023, which appears to be its final gravity. I racked it to a carboy at the end of May.

It’s going to stay there for months. I plan to bottle it in November so it’s ready to drink on Lucian’s first Christmas. Since I’m not an everyday barleywine kind of guy, I’ll save it for special occasions, birthdays and other milestones. I think I can get several years of good aging out of it if I treat it right. Even if it starts to decline after a while, I have to save at least one bottle to share with Lucian on his 21st birthday.

And then I can embarrass the hell out of him with the Froglegs thing.