One Drink Minimum: Blues at Red’s and some Pink

Things have been pretty busy for the last week between the day job and writing, but on Thursday evening I was able to take a little break from it all. The occasion was a performance by former Pink Floyd frontman Roger Waters at the Frank Erwin Center in Austin, performing the group’s legendary album The Wall in its entirety. Before the show, I stopped at Red’s Porch in south Austin to enjoy “half pint night”, where the featured beer was Oskar Blues Deviant Dale’s IPA. 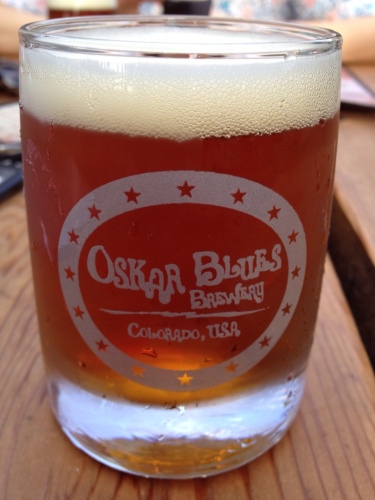 This was a spectacular beer. The color is a bright, vibrant orange that I suspect comes from the addition of Victory or dark Munich malt to the grain bill – my money’s on Munich, but as of writing this I haven’t had a chance to confirm it online. The aroma exudes grapefruit and pine, and is the freshest hop presence I can remember smelling in a beer. Late hop additions? Definitely, though I haven’t looked into which ones (and I’ll admit I’m not quite able to tell them all apart by smell and taste just yet). But when the glass was put down, it smelled like someone was holding a bag of fresh hops under my nose. I wanted to dive in.

Once it hit my palate, what surprised me most was its incredible smoothness. They call it an Imperial IPA, but at 8% ABV it’s right at the bottom of what I’d consider the appropriate alcohol range for the style. To be honest, it doesn’t even taste that strong. But as I kept drinking, it also became apparent that the beer is nearly perfectly balanced: its 85 IBUs are perfectly countered by a lotof malt sweetness, but without being cloying. For a hop bomb, there’s no resiny or medicinal quality that I can taste. The mouthfeel was just right, refreshing but not too dry. This is a brewery that knows how to make an IPA, and I’d drink it all day long. Luckily, between Lisa and I, we drank four of the half-pint glasses, and have a nice set to remind us of the experience.

Lest anyone be concerned that the concert was an afterthought after such a sublime dinner-and-drink experience, rest assured that it was not. I’m a raving, drooling Pink Floyd fan, and every time I’ve seen Roger Waters live (four times now, twice with this production of The Wall) he puts on a great show. He has an uncanny ability to connect intimately with a crowd of thousands – even in a university basketball stadium, and even when performing half of his show from behind a wall of cardboard bricks – no small feat for a rocker who was once notorious for his feelings of alienation from his bandmates and animosity for his fans (which inspired the album in 1979). But to paraphrase his song “One Of My Turns”, he has grown older, much less colder, and seems to be having a lot of fun. Or at least as much as is tasteful, given the very socially conscious themes and images of the show. He jumps around. He dresses in costumes. He pantomimes the lyrics. And he thanks his audience over and over again for letting him do it at his age. Reading between the lines of his comments to the audience, it’s obvious that Waters sees his touring now as a kind of therapy: no longer feeling isolated as he did when he wrote the album, he’s reinterpreted the story to shine a spotlight on those who feel isolated all over the world due to political and social injustices. To call it a concert is to do it a disservice: it’s a work of performance art and a heartfelt call to action to make the world a better place. It’s bombastic but honest, grandiose but personal.

A perfect balance of sweet and bitter in an unexpectedly subdued Imperial IPA, and a balancing act from a performer letting go of his darkest memories by reliving them. I’m wondering if that’s not a coincidence; if in fact that kind of balance is present in everything great. In any case, it was a fantastic intermission in an otherwise exhausting week.

I hope to be back on track with more posts later this week. Until then, prosit.