Easy Tiger opened earlier this year on East Sixth Street, promising fresh baked-in-house breads, ample taps, and a menu that goes beyond pizza, all just down the street from the chickenpox of dive bars and music venues that dot the sidewalks of what the kids call “Dirty Sixth”. This was Easy Tiger’s first beer dinner, and it showed – mainly through oversized portions; a good problem, really – but the dishes were tasty and the pairings on the mark.

It would’ve been hard to imagine it when I first moved to Austin, but Real Ale is now the big kid on the block in Central Texas craft brew. With every new brewery that sets up shop in the region, Real Ale becomes more and more the elder statesman, and they’ve been accused of letting themselves go stale, of not pushing the envelope. (Aside from their flagship ale Firemans #4, most of their beers fall firmly in the American-British spectrum of bitter/pale ales: an APA, a rye APA, an IPA, etc. … but they do make a fantastic barleywine and some nice German seasonals.) The lineup for this beer dinner seemed carefully choreographed to prove that the old dog still has some tricks in it, and while I’m not sure I bought the routine 100%, the beers were well-made and I had a fantastic time.

Aperitif: Firemans #4 – Before the first dish came out, we started with a 6-oz pour of Real Ale’s ubiquitous flagship blonde ale. If you haven’t tasted this beer, you haven’t been to Austin. It really is everywhere, and it’s been the gateway to craft beer for frat boys and good ol’boys in this town for years (not to mention a few people I know). Call it boring; but you can’t argue with its quality, and they brought out the freshest batch I’ve ever tasted for this event. Crisp, clean taste, a nutty continental malt aroma, and a noticeable but not intimidating noble hop flavor make this a beer you can buy a case of for that stubborn Bud drinker in your family, even for your mom. And I have. 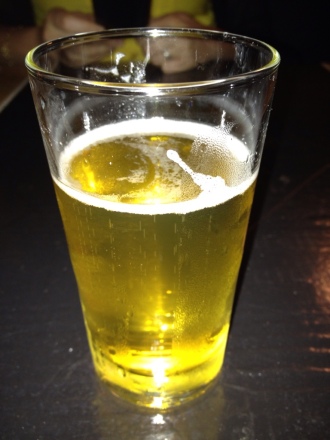 Then the marquee lineup started: 6 dishes paired with 6 beers, about 6 ounces worth of each (cue Iron Maiden). The trick I mentioned earlier was that these 6 beers came from only 3 different “wort streams” – this was a new term to me, but basically means simply that 3 different worts were fermented under different conditions to produce 6 different beers.

First Course: Lost Gold IPA with mussels, smoked tomato, fennel, leaks baguette – Real Ale’s aptly named year-round IPA pours a deep golden color. The aroma abounds with grapefruit and floral notes. The flavor is a modest but noticeable blast of hops that doesn’t fail to refresh. It went astoundingly well with a smokey mussel stew served family-style with a whole baguette (for two). We scraped the bowl, and it was a big bowl. And all I can say about the bread is, “OMG, bread!” You can tell it’s what Easy Tiger does best.

Second Course: Empire Barrel-Aged Lost Gold IPA with duck sausage, corn pudding, watercress – The second beer made from the Lost Gold IPA wort was aged in red wine barrels that left a blanket of sour cherry fruit notes on the whole thing. The hop aroma faded with the aging, as expected, but the bitterness remained, and the beer poured enticingly murky. A hint of pungent funk from the barrel complemented the rich, earthy duck sausage. The corn pudding was light and fluffy; it complemented the sausage just fine but was easily overpowered by the beer. The disparate elements of the dish worked better separately than as a single bite.

Third Course: Imperium Wild Lost Gold IPA with apricot-braised goat, local shell pea cake, mint gremolata – The third version of Lost Gold was aged in similar barrels to Empire, but wild fermentation was induced for a funkier flavor. Floral notes took center stage on this one, and it was very dry, balancing very well with another rich protein dish. The apricot balanced both the gaminess of the goat and the funkiness of the beer. By now, I was really excited about what the night had in store. I was eating great food and enjoying the results of an experiment on how one wort could become three very different beers.

Check back in a few days when I post my reviews on the last three pairings of the evening, and my overall impressions. It was a delightful and insightful night.