Strike up the Sousa march …

This Fourth of July, I celebrated my right to make beer. Regular readers may recall that a few months ago, I posted a recipe for an American Colonial Ale inspired by a recent trip to Philadelphia. The perfect beer to brew on the Fourth of July! But silly me, I forgot all about it until after I left Austin Homebrew Supply with my ingredients for a different beer. So I’ll have to brew the colonial ale another time. Oops …

Instead, I brewed a single-hop Galena American Pale Ale, the second in my “Misty Mountain Hop” series of single-hop brews (the first was a Citra APA). This was a new grain bill entirely of my own devising, and if the beer comes out well, I’ll probably make it my standard grain bill for all APAs from now on:

The wort looked and smelled delicious coming out of the mash tun, a sort of tangerine-copper color with an aroma like toasted artisan bread. I’ve got high hopes.

The hop additions were all Galena, of course. This common bittering hop doesn’t seem to be used often for late hop additions, but I’ve read reviews of a few beers with late Galena hops that had descriptors like “dark fruit” and “tart berry”. Sounds awesome to me. I used:

All of my Galena hop pellets were rated 12.8% AA. I’ll probably add another half ounce of dry hops before kegging for added aroma. My OG came in at 1.055, pretty much smack in the middle of the BJCP range for American Pale Ales. I pitched 15 grams of rehydrated Safale US-05 yeast.

But my real declaration of independence this brew session was from my old swamp cooler. After long deliberation (and somehow, writing about the idea a couple of weeks ago made it seem more feasible – thanks, Internet!) I finally bit the bullet and got myself a true temperature-controlled fermentation chamber: a Kenmore 5.1 cubic foot chest freezer with a Johnson Digital Temperature Controller dialed in to a range of 65-68°F. 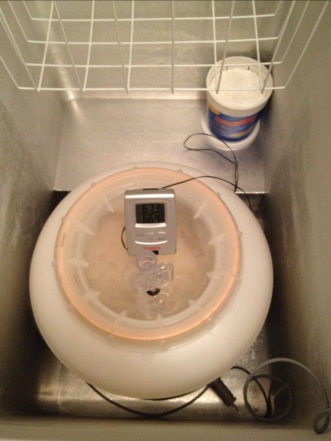 The Galena APA has been in there for a few days, and I’m still working out the kinks. Last night after I was out of the house all day, it had somehow got down to 60°F, though it was back up within minutes after I cracked the freezer lid for a while. But I can already say that this is one of the best purchases I have made in support of my homebrew habit. Ever. No more checking the closet every hour to monitor the temperature. No more keeping dozens of frozen water bottles on hand, waiting to be used in the swamp cooler, spending their idle time rolling around my garage freezer and making it harder to find more important stuff (like, you know, food). Perhaps most importantly, no more risks of infection from the stagnant water in the swamp cooler, which always bothered me. I just let it do its thing, check it once or twice a day, and it’s always been in the range I want … except for last night, but it’s never gotten higher than 68°F.

And now I am at liberty to brew what I want to brew, any time of year. I can lager in August. With a few modifications, I can make warm-fermented fruity Belgians in February.